The Forgotten Oil and Gas Study is a new package built on a robust statistical analysis of data from within GOM3. This study covers many datasets, including field and sand reserves, the atlas of sands data and completions which never produced, but the largest analysis focuses on decline curve analysis of every reservoir in the Gulf of Mexico which is no longer producing.

The study focused on identifying and quantifying the remaining producible oil and gas in all GOM reservoirs abandoned before 2010. We found several hundred million barrels of oil and several trillion cubic feet of natural gas spread among hundreds of old reservoirs, which had produced but are now inactive. In all cases, several decline curve models were applied, the statistically best fit results retained and 10/90 confidence intervals generated for all the results.

In addition to automated decline curve analysis of over 25,000 reservoirs, we found reserves written down by MMS/BOEM in their annual assessments that deserve re-examination, reservoirs that were shut-in before they began to decline, completions with promising initial test results that were never produced and about a dozen sands over 1 million BOE that were discovered but apparently never produced.

All of these results can be fully integrated into GOM3 to allow users to leverage these results with the additional information of geology, engineering, leasing and environmental data. More information can be seen in the presentation available when clicking the new option in the pull-down menu of the GOM3 toolbar. An article about the study will also appear in the August 4th edition of Oil & Gas Journal.

Displaying specific reservoirs in a map.

Save the Date: GOM3 User Conference

The next User Conference will be held Thursday, October 30, at Murphy's offices in Houston. More details will be released next month, but mark your calendars today. Also, if you are interested in presenting a paper at this year's conference, please contact us with a title and topic at contactesa@earthsci.com. 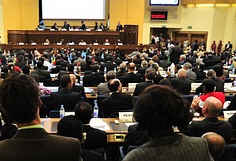 As a reminder, the next class from TeachMeGIS: Analyzing Petroleum Data in the Gulf of Mexico with GOM3. The class will be held Tuesday, July 22, at their Training Center in west Houston. This is a one day, hands-on workshop covering the basics of GOM3 data, ArcGIS software and GOMsmart. An outline of the class is available here (PDF) and registration can be completed at the TeachMeGIS website, www.teachmegis.com.