GOM3 officially supports ArcGIS Desktop 10.3. There are also no known 10.3 bugs separate from GOM3 to note at this time. In fact, an ArcScene bug handling transparency properties of extruded lines has been corrected.

There are no additions for ArcGIS Professional at this time. More research will be done at ESRI's Developer Summit in March. If you are able to get out to Palm Springs to attend that conference, look for Tony Dupont there: tony@earthsci.com.

Many datasets were added in the February update to help with considerations for upcoming lease sales. While deferred blocks and portions of blocks have been in GOM3 for some time (the Eastern Gap, National Marine Sanctuaries, etc.) only certain stipulation areas were included. Now all stipulation blocks are available: Military Warning Areas, Live Bottoms, Topographic Features, Blocks south of Baldwin County, Below Seabed Operations, Law Of The Sea Convention Royalty Payments, US/Mexico Transboundary Agreement areas and Evacuation & Coordination Stipulations. All load from a single checkbox under GOM-Cubed->Map Layers->Leases, on the Reference/Prep tab. 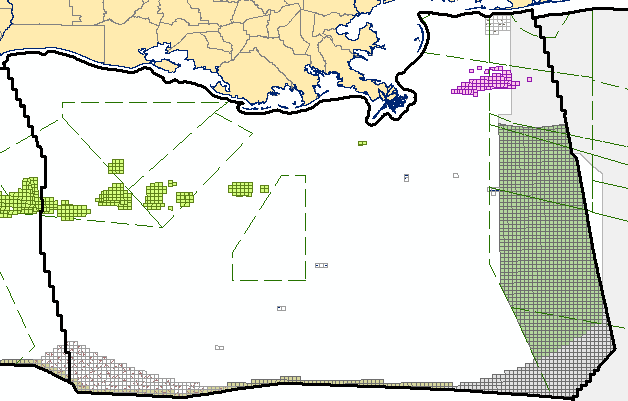 Blocks with Stipulations or Deferrals for Central Sale 235.