in ArcMap, ArcScene and ArcGIS Pro. The set of ESA Tools is divided into multiple categories, primarily meant to ease the use of ArcGIS. In this issue, we're looking at the Cartographic set of tools.

Because of the advances made in Pro, many of the Cartographic tools were not carried over and we will detail that below. A couple of important notes about ArcGIS Pro to keep in mind: displaying 3D data does not require the 3D Analyst extension and Pro is included with the ArcGIS Desktop subscription, so if you have ArcMap, you can install ArcGIS Pro side-by-side.

Going slightly out of order, let's begin with the Label Expression Library, which is available in both ArcMap and ArcGIS Pro. This is a collection of pre-made label expressions that can be added to existing GOM3 data. For example, the most complex label in the library is the GOMsmart-style label expression for leases.

This label includes the OCS Number, Operator, Status, High Bid Amount, Expected Expiration Date, and then the top five owners, with their assignment percentages. Not only is the expression a huge time-saver, but also a good starting point for modifications to create different labels.

One important note, however, is that the the Label Expression Library does not control the label placement. As always, there is a lot of customization available in ArcGIS and different maps will have different needs in terms of emphasis or fitting.

At left, the default label position. At right, label placed in the upper left to display Block Number in center.

The Query Wizard isn't much of a wizard, but it does incorporate the ability to perform both Selection Queries (highlighting data) and Definition Queries (restricting data). It is a one-stop shop for both types of queries in both ArcMap and ArcScene.

Selecting wells that were spud after the start of 2020.

As a reminder, the selection queries continue to display all of the data, but highlight features that match the query. This is especially important for a secondary action, such as finding other features that intersect or are proximate to the highlighted features. For example, this query might select (highlight) leases operated by BP; subsequently, those highlighted leases can be used to locate wells on those leases, or leases that are adjacent to the BP leases.

Definition queries, on the other hand, filter out the data, so only the features matching the query are displayed in the map. This can be used to only show wells that have produced, or only leases that are set to expire in the next year.

Many attempts were made to improve the Query Wizard to make it more of a true wizard, but were often stymied in trying to make the wizard both intuitive and flexible enough for complicated queries. The existing Query Wizard was not recreated for ArcGIS Pro because the Query Builder in Pro is better than any of our attempts made to improve queries in ArcGIS. The query builder in Pro keeps the steps simple while allowing complex queries and handles syntax/punctuation in most cases.

Selecting wells that have produced in water depths greater than 1,000 ft.

The Label Manager was created to control the visibility and simple characteristics of all layers in the map at once, without going into the Labeling toolbar. This is a simple tool meant to save time, but the Advanced Options button goes directly to the full Label Properties of the selected layer, allowing access to label placement and complex expressions. 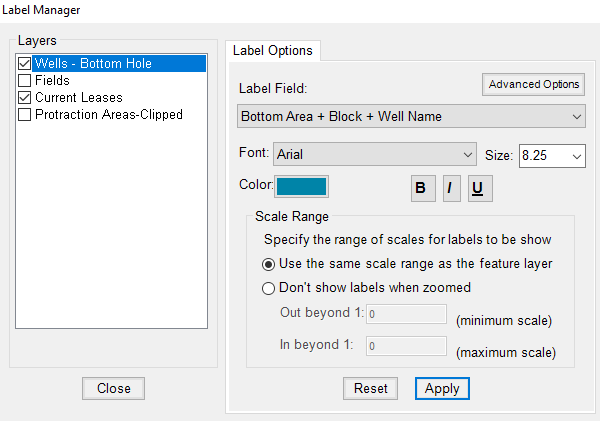 Quickly turning labels on and off in the Label Manager.

In Pro, the Label Properties have been separated from the other Layer Properties, with more customization and placement, as well as a context-sensitive ribbon to control the basic labeling when a layer is selected. Another big advantage is that the advanced label placement of the Maplex engine is fully integrated in Pro. The modified accessibility is generally helpful once you get used to it, though a smaller ESA Label Manager is planned if there is enough interest.

Label positioning for a point layer.

This simple tool is particularly important in ArcMap and ArcScene. It is exactly the same as the default Create Layer from Selected Features option in ArcMap and ArcScene, but with the benefit of maintaining the column aliases in the attribute table of the new layer. This tool was not recreated in ArcGIS Pro because Pro's default Create Layer from Selected Features tool maintains the column aliases.

Aliases in the attribute table of leases.

In ArcScene, it can be difficult to to recognize depths without an easy frame of reference. The Depth Reference tool inserts a transparent grey plane that can be moved up and down through the scene to provide that frame of reference. This tool was not recreated in ArcGIS Pro because Pro displays the depth/elevation of the cursor location at all times at the bottom of the scene (as well as the X and Y location). 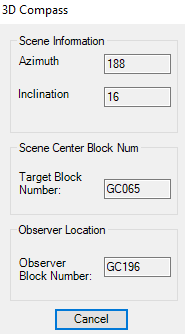 Like most of the cartographic tools, this one was not recreated in ArcGIS Pro. Along with the location of the cursor mentioned above, Pro displays a helpful set of navigation controls in the lower left corner of the scene. These controls can be used to move up and down, zoom in and out and rotate both the scene and the camera. The Saturn-like ring around the central globe shows the inclination and the arrow on the outer ring points north. At the bottom of the scene, the number on the left shows that the camera is 12,149 ft above sea level. In the center, the coordinates of the cursor (on the red sand) show the X and Y location and the depth of 22,253 ft below sea level.

Sands of the Garden Banks 387 field are 67% transparent in the scene. The wells are shown with bivariate symbology to easily show preferred high resistivity/low gamma ray values.

For a list of past newsletters, click here. Also be sure to check out our YouTube page for helpful videos and if you have suggestions for videos you would like to see to aid your work, please let us know here.